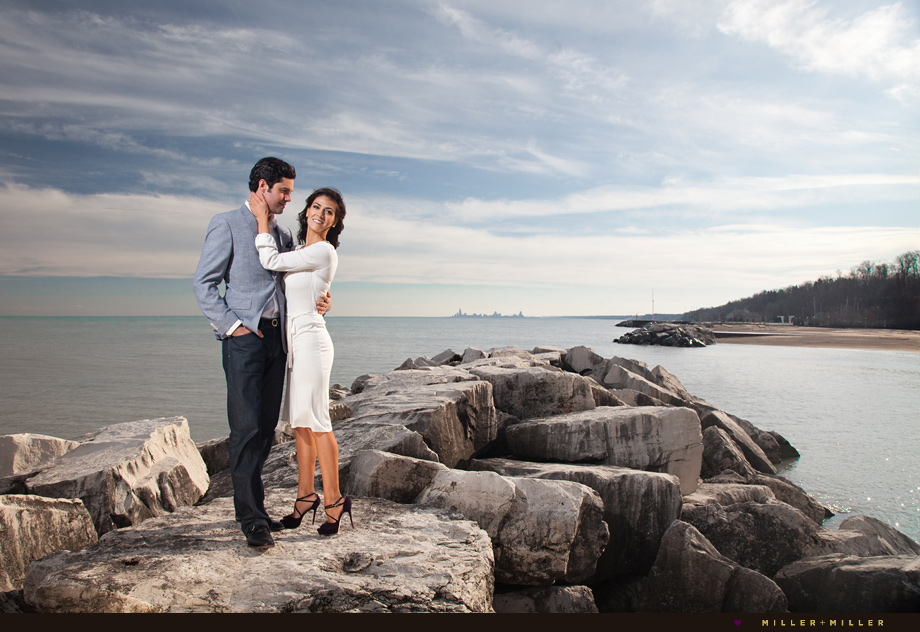 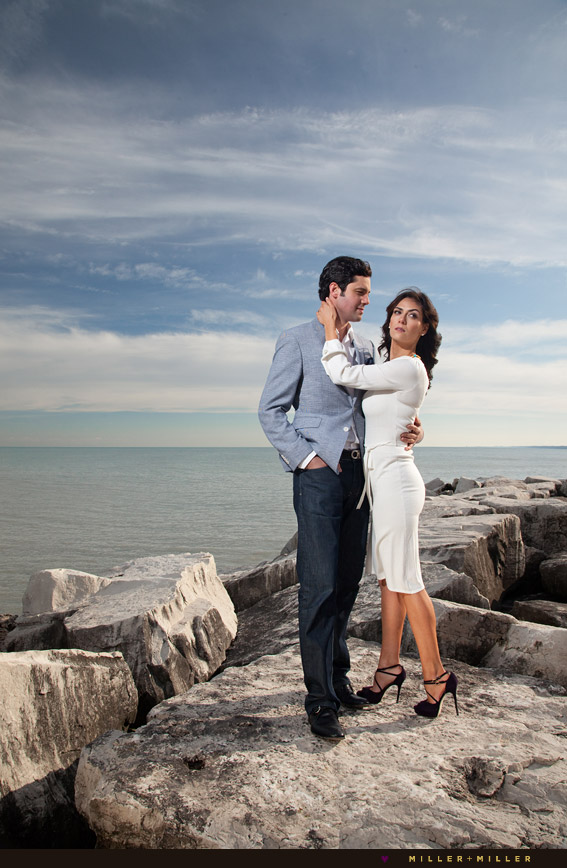 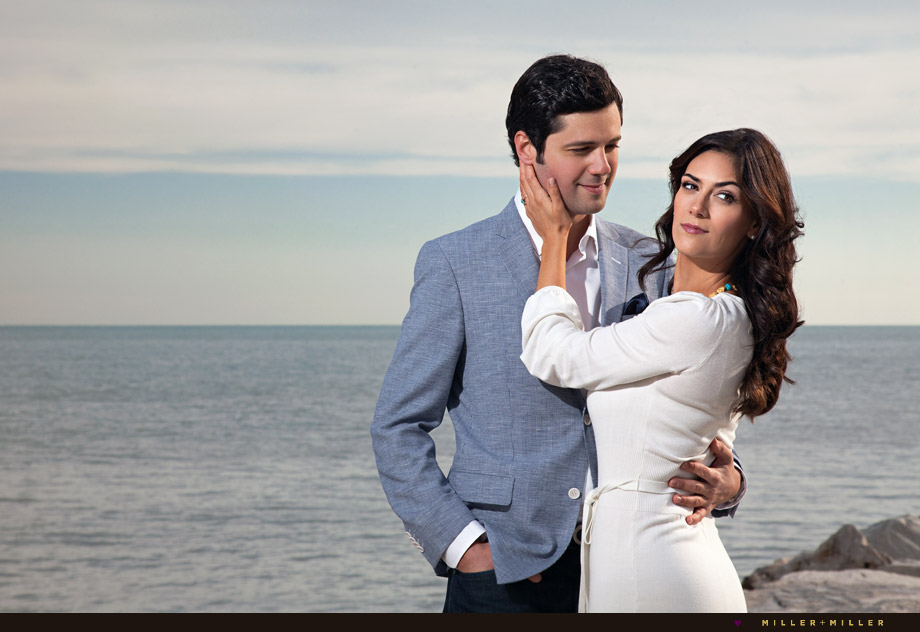 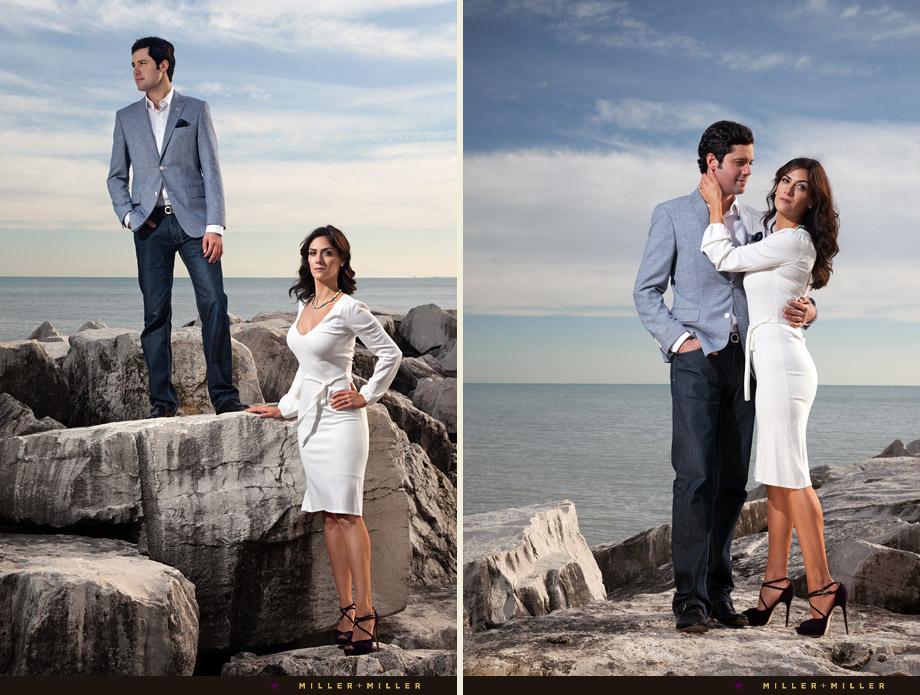 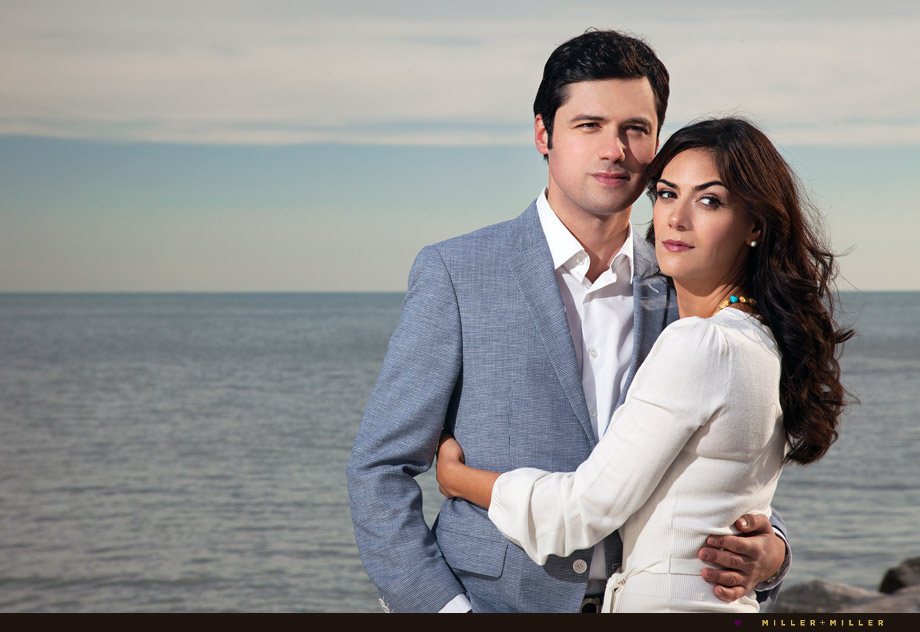 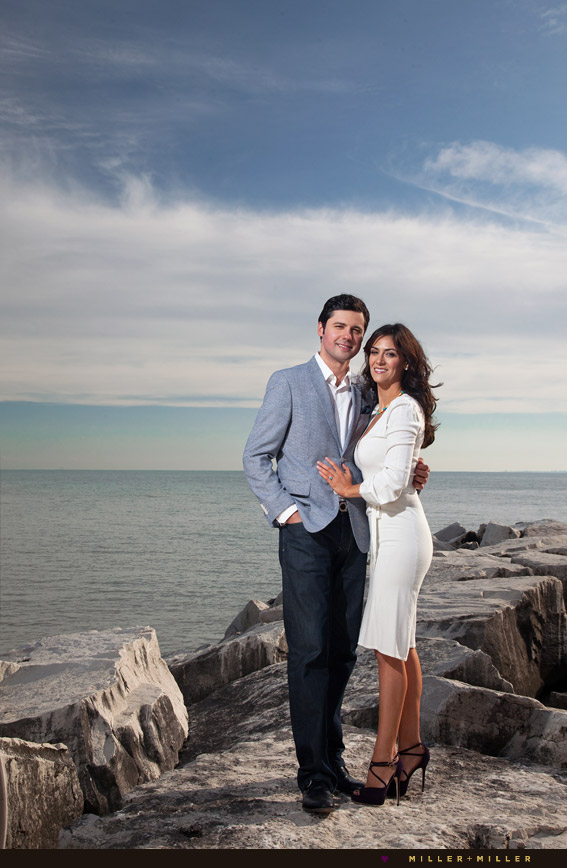 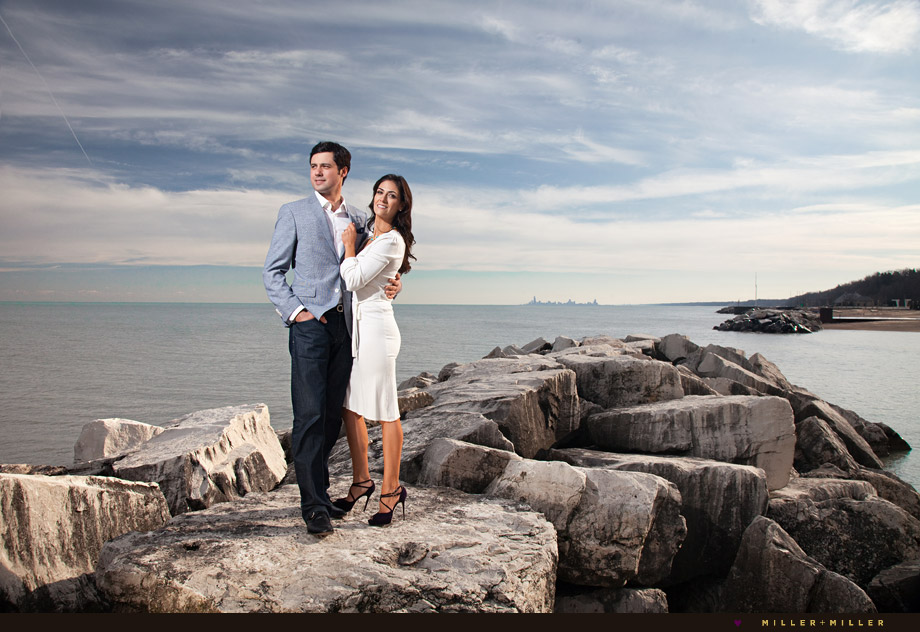 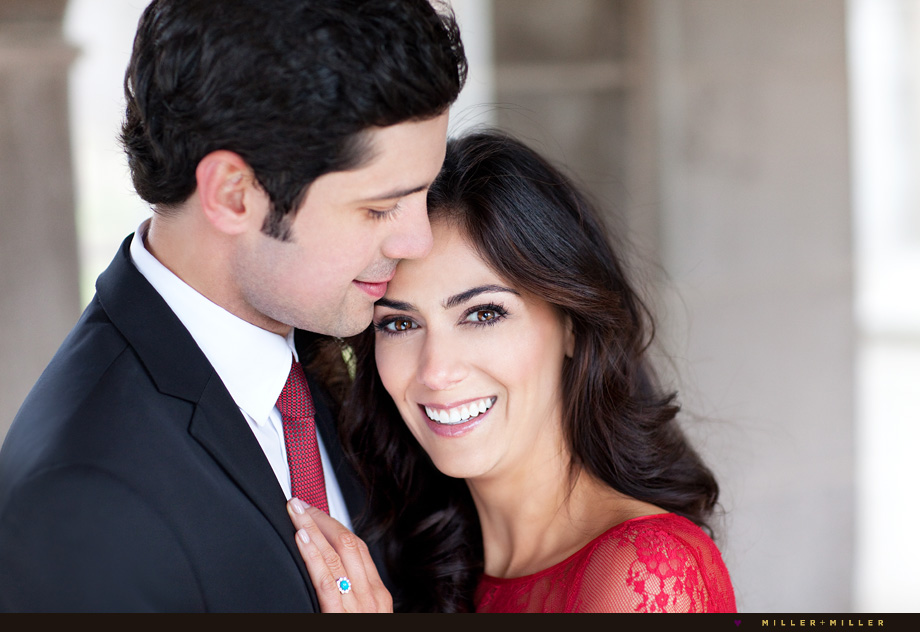 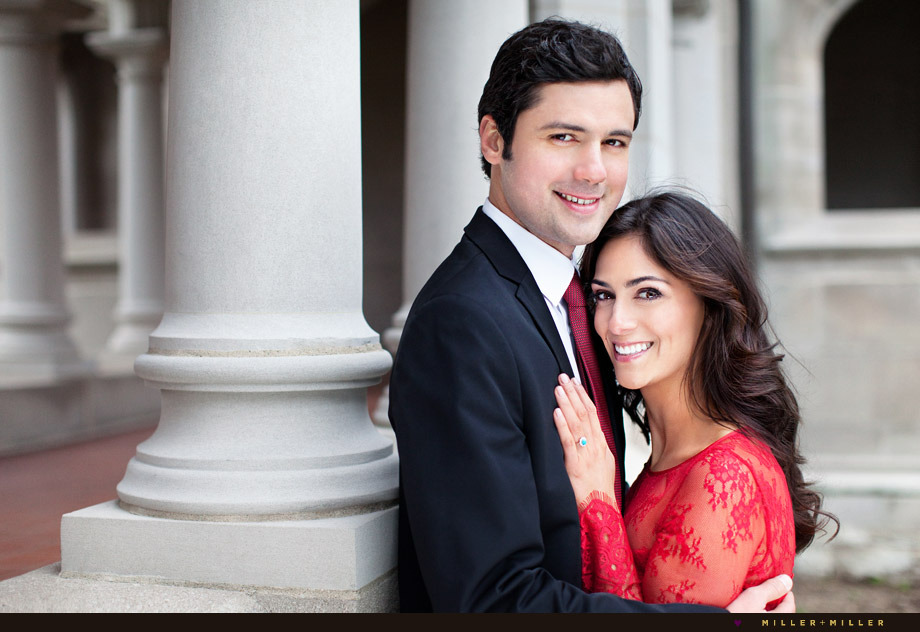 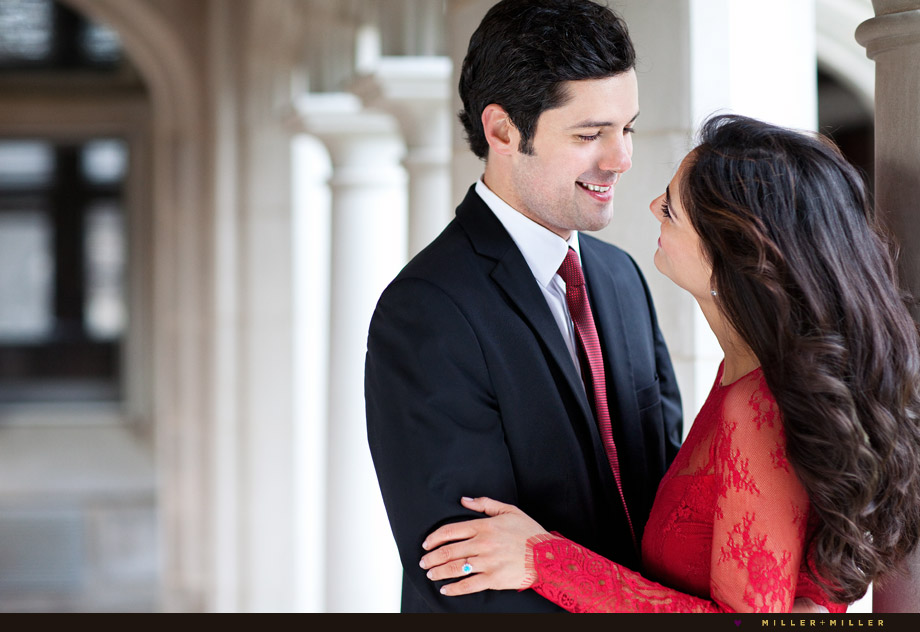 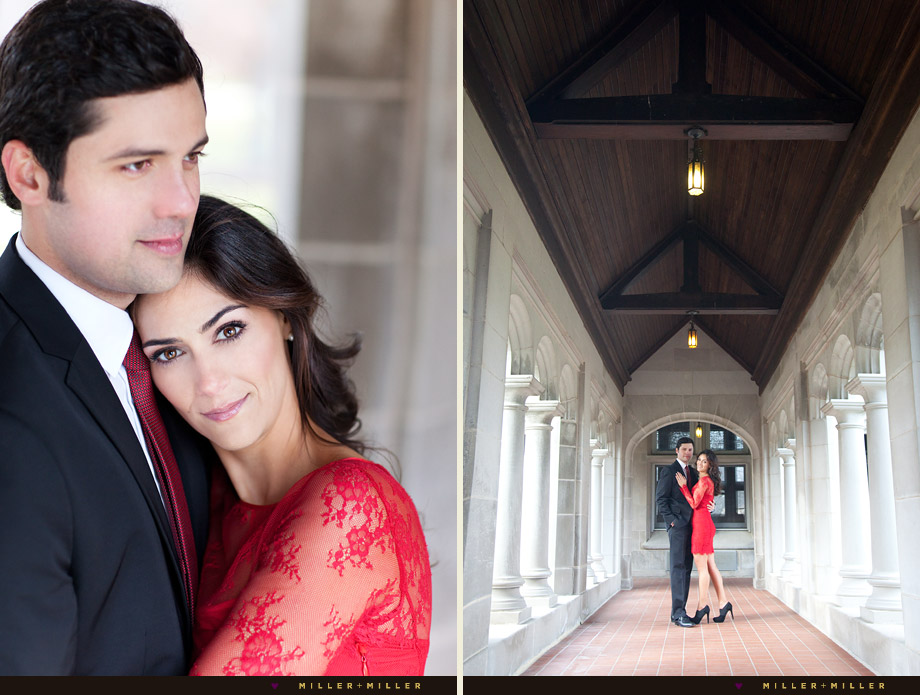 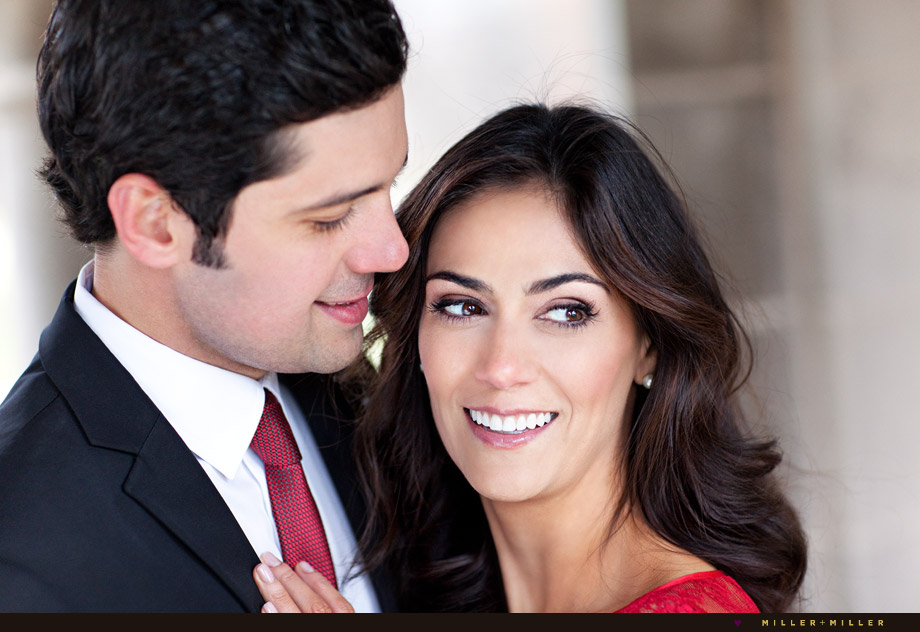 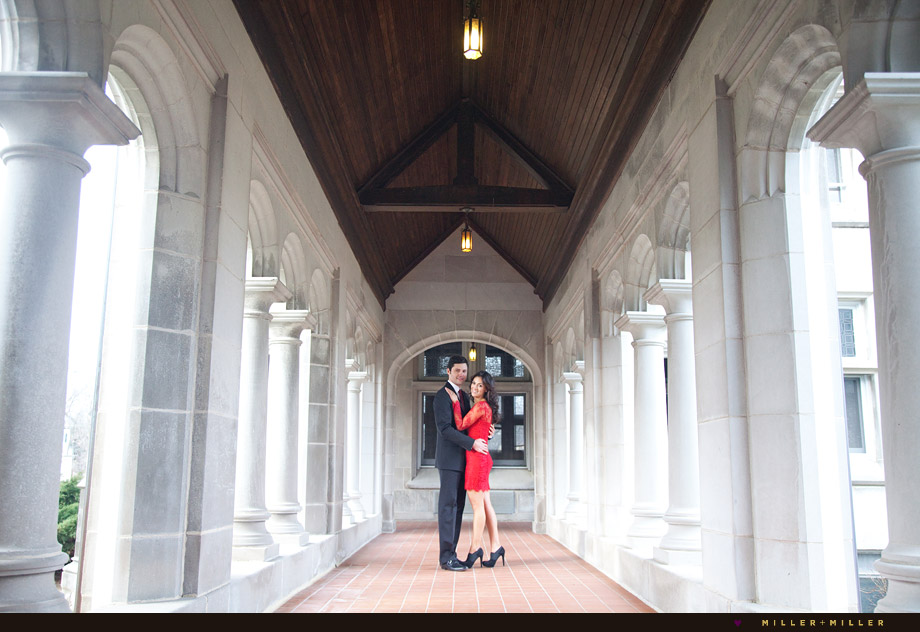 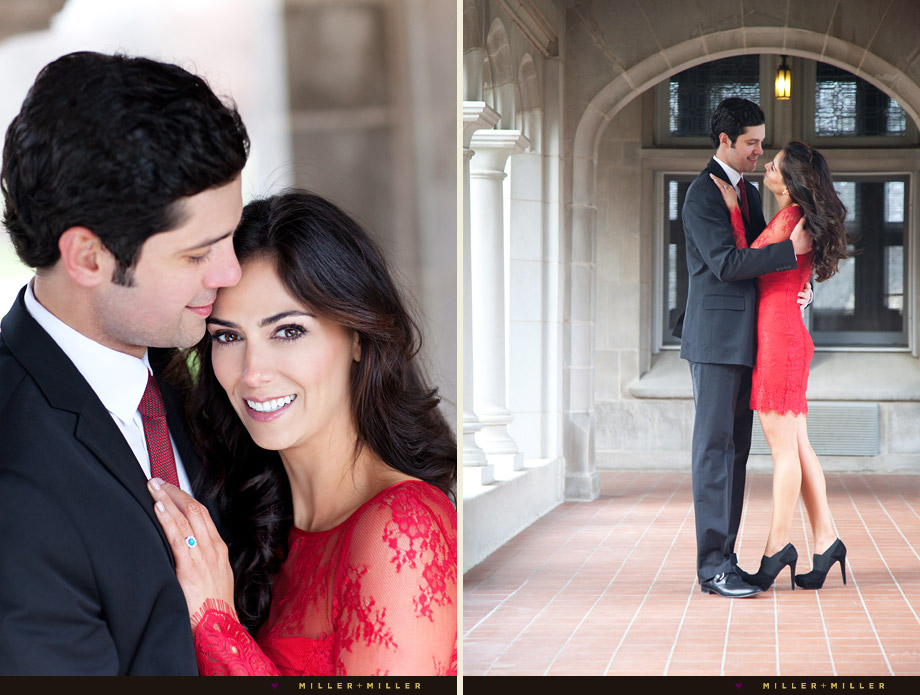 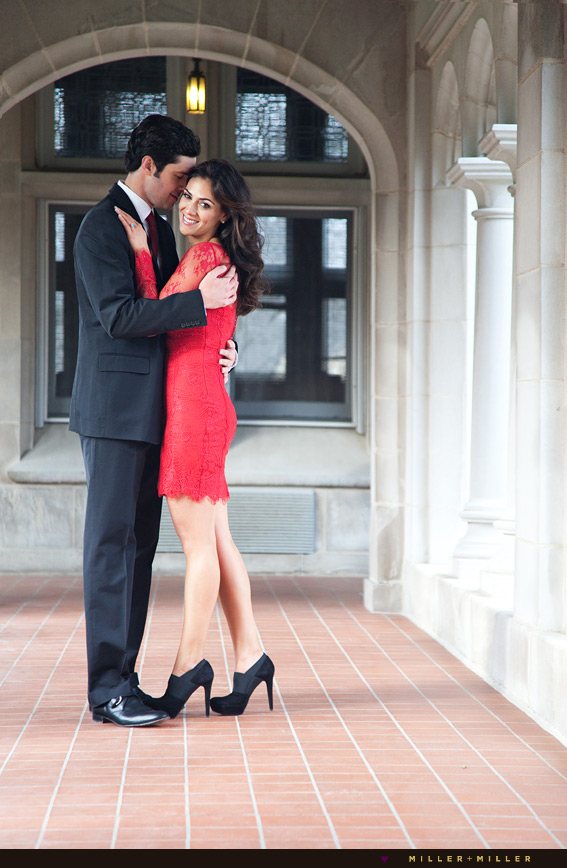 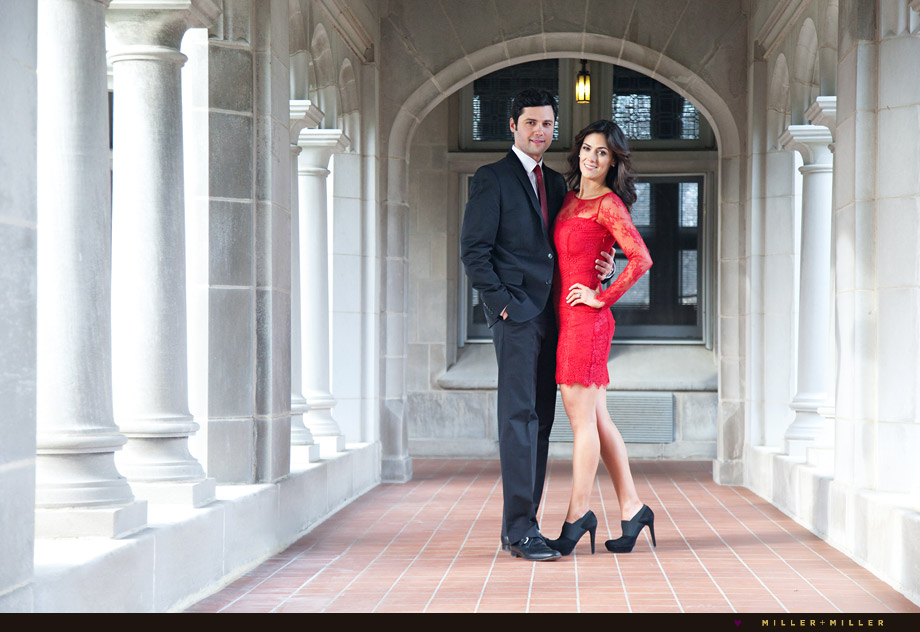 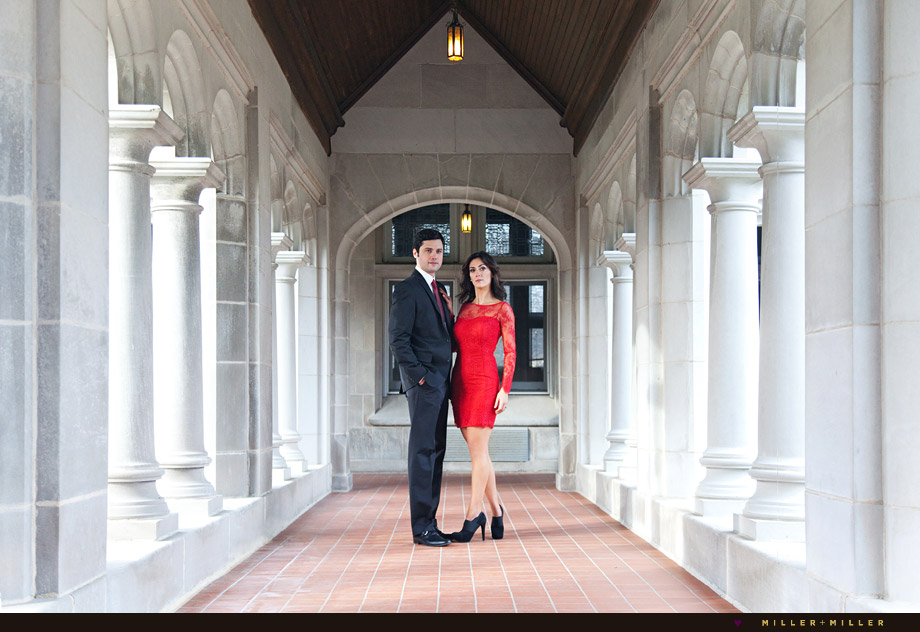 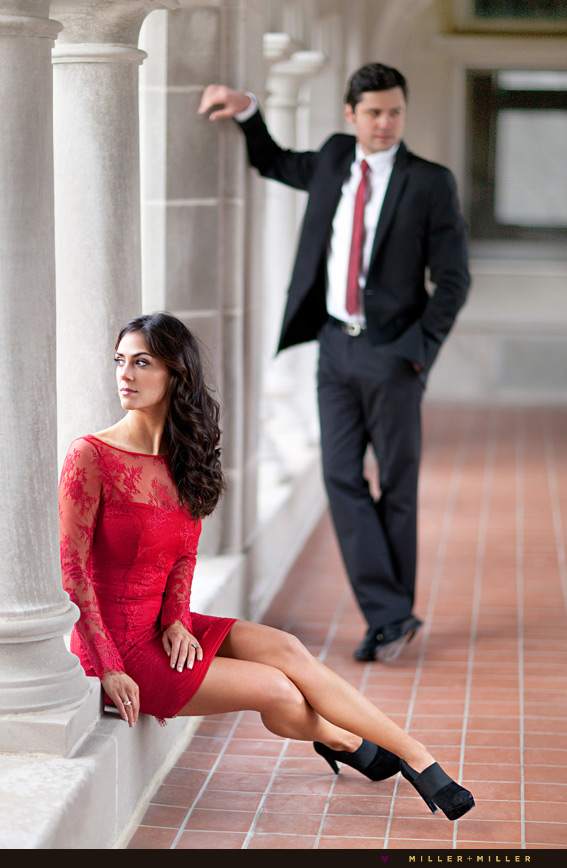 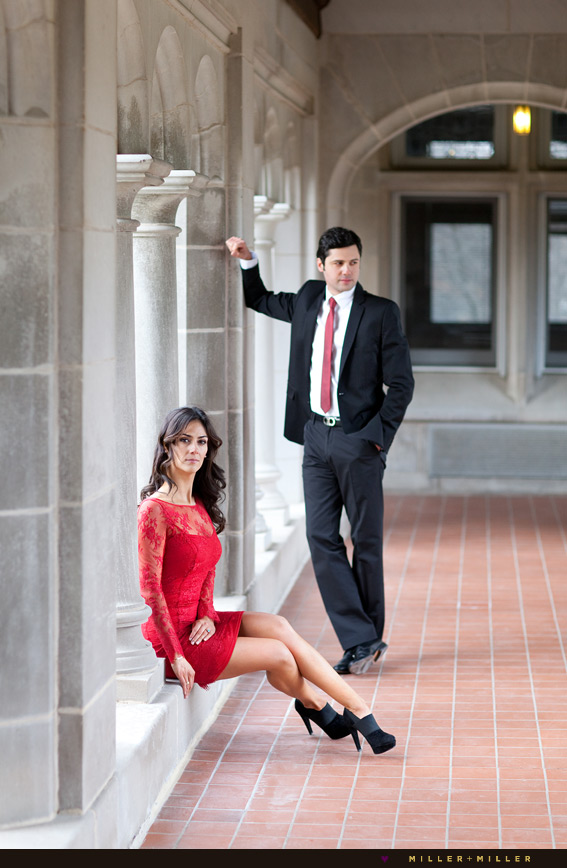 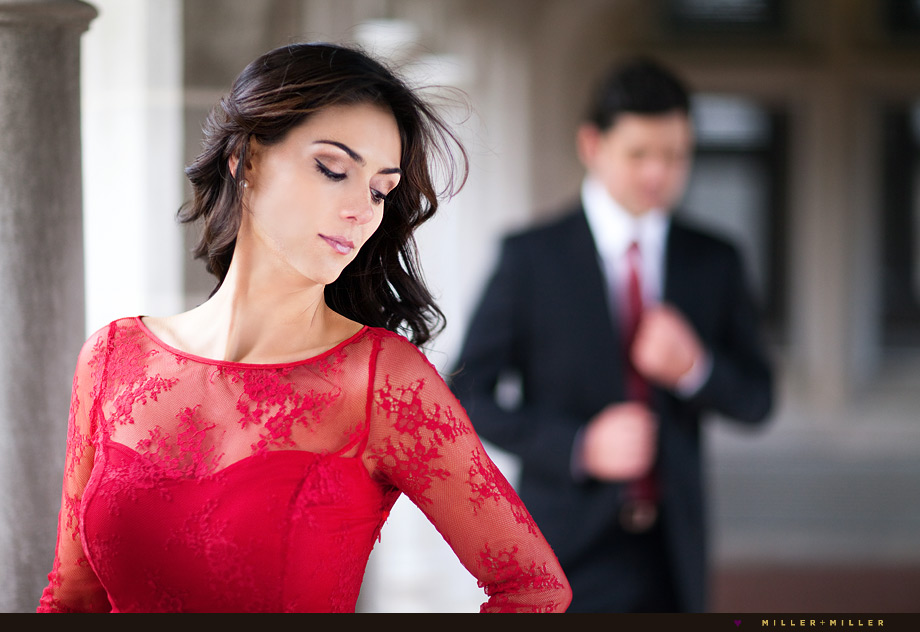 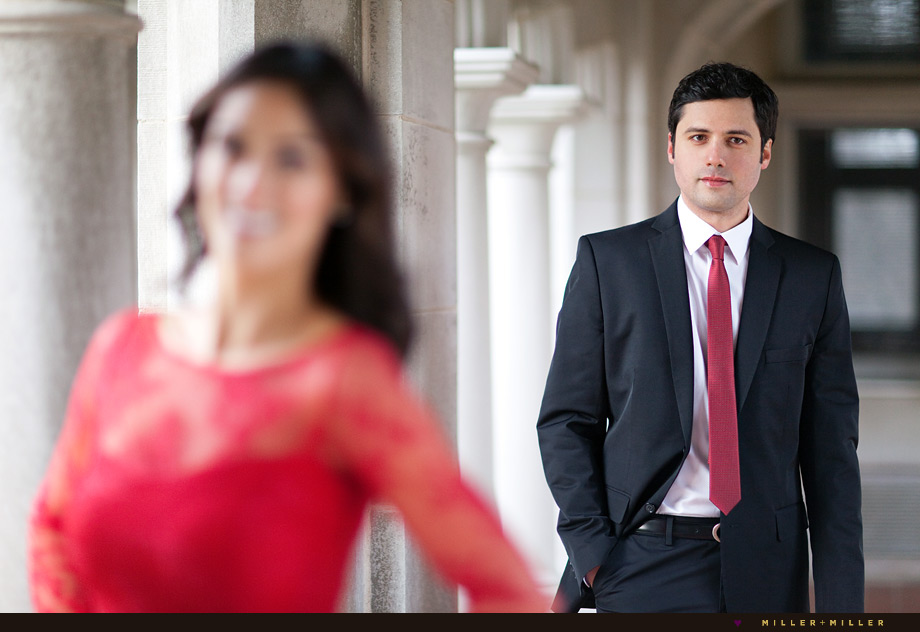 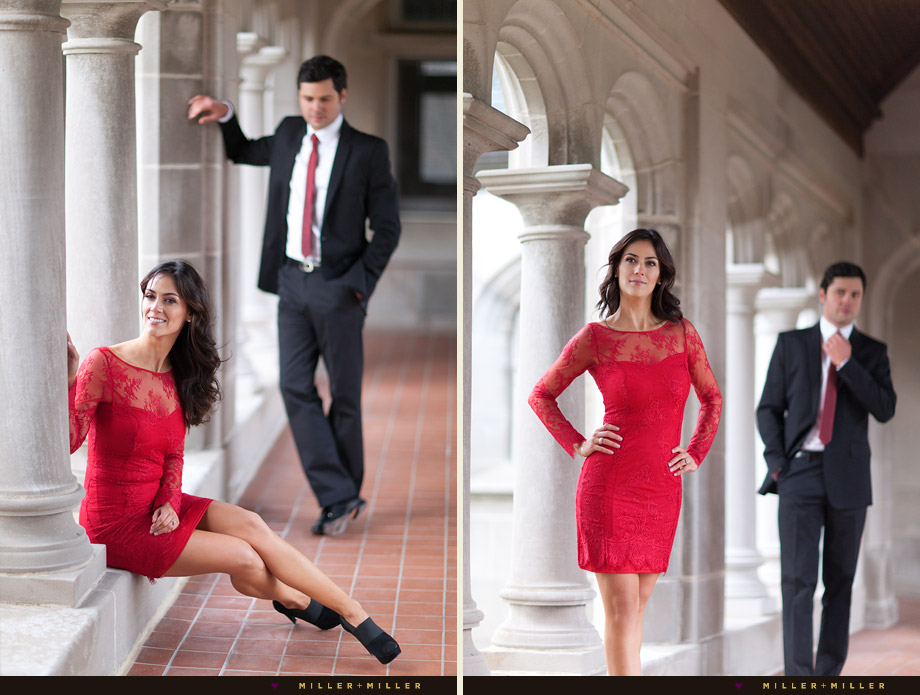 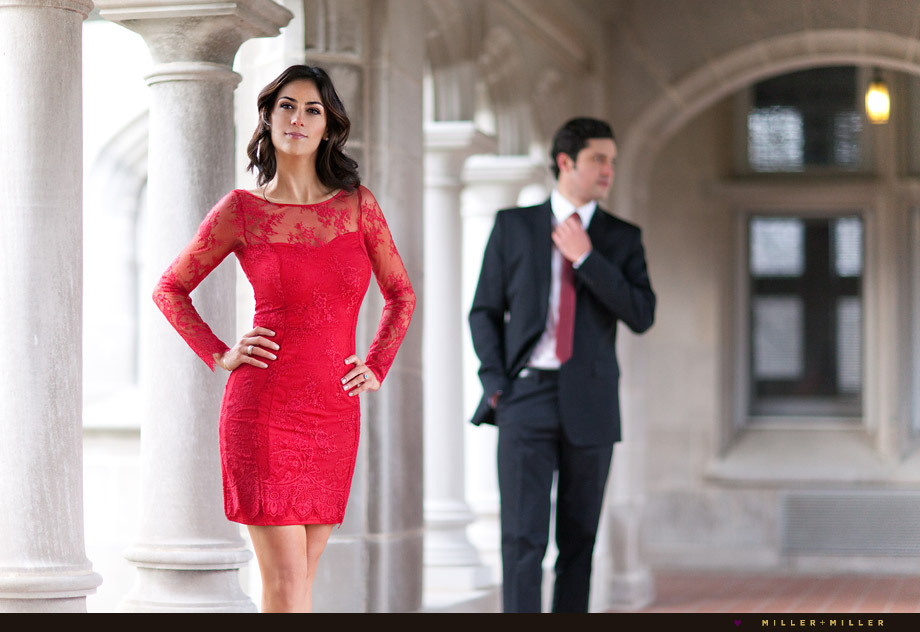 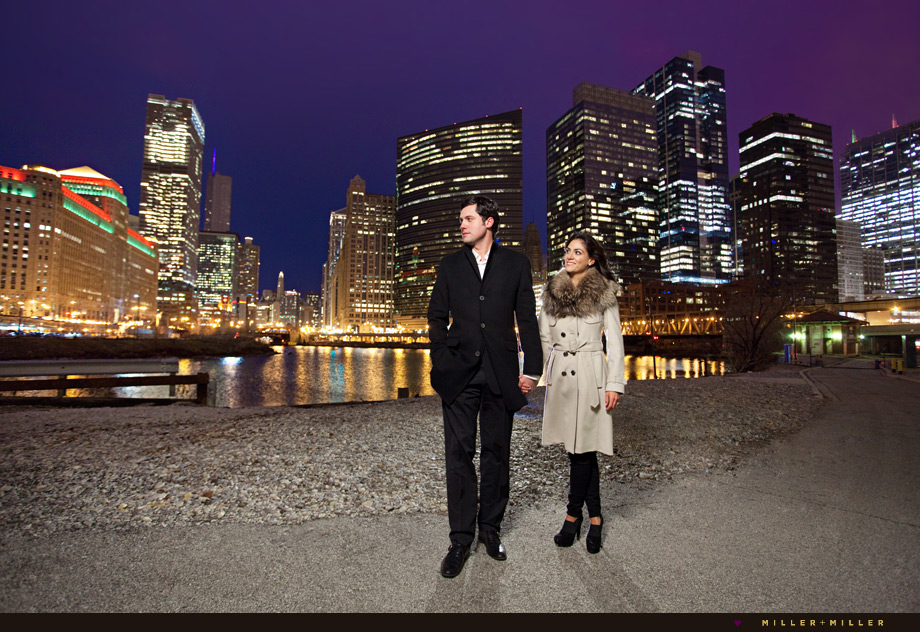 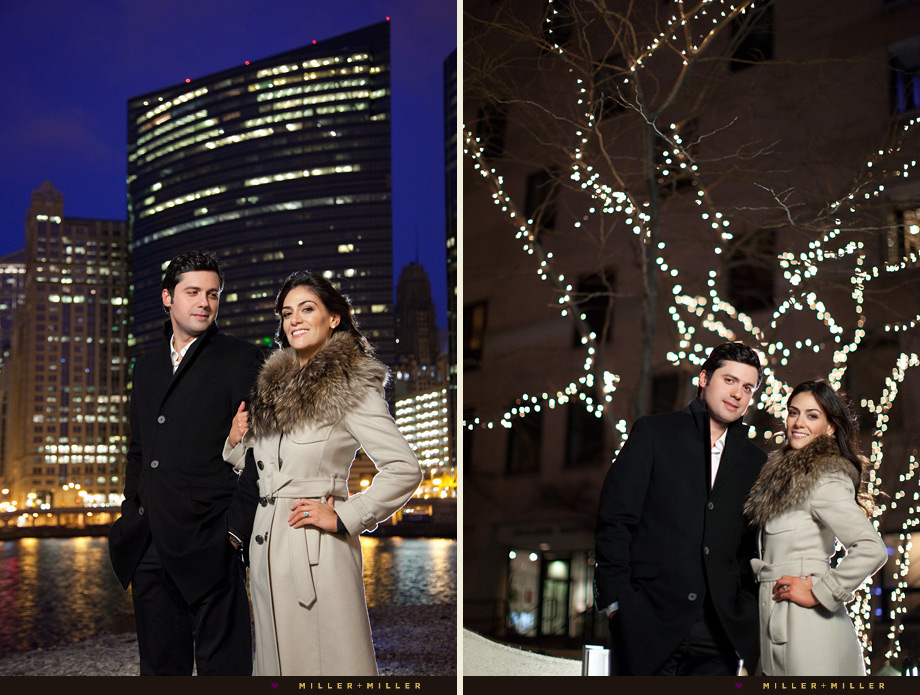 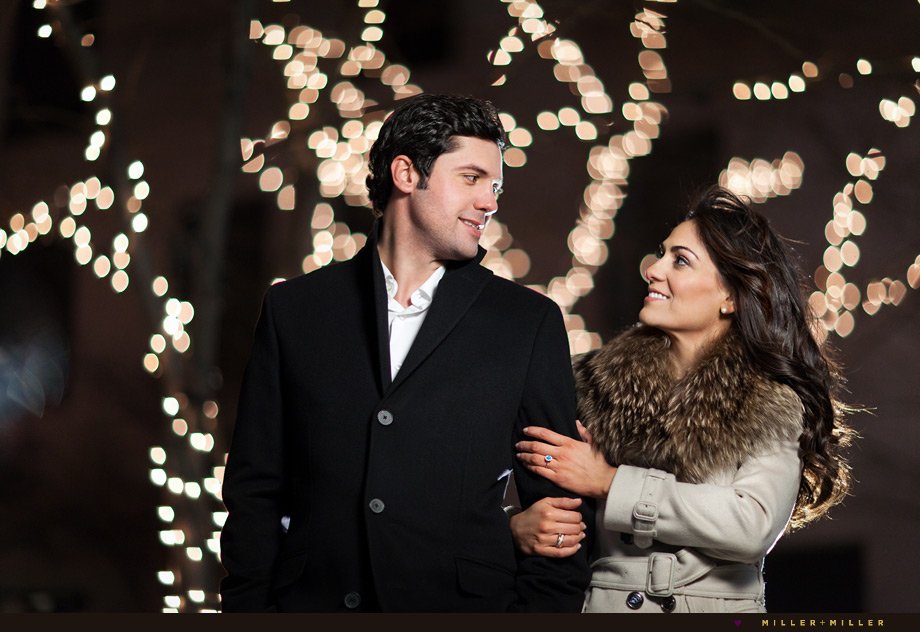 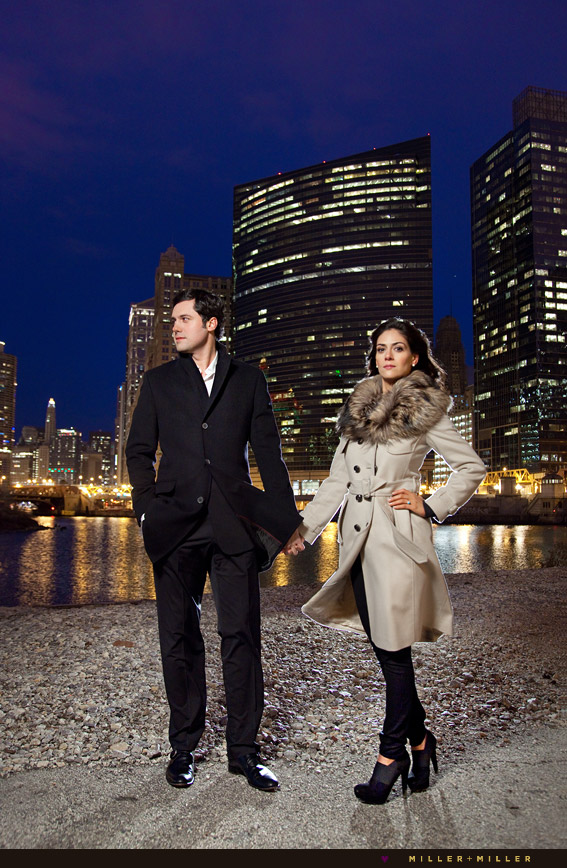 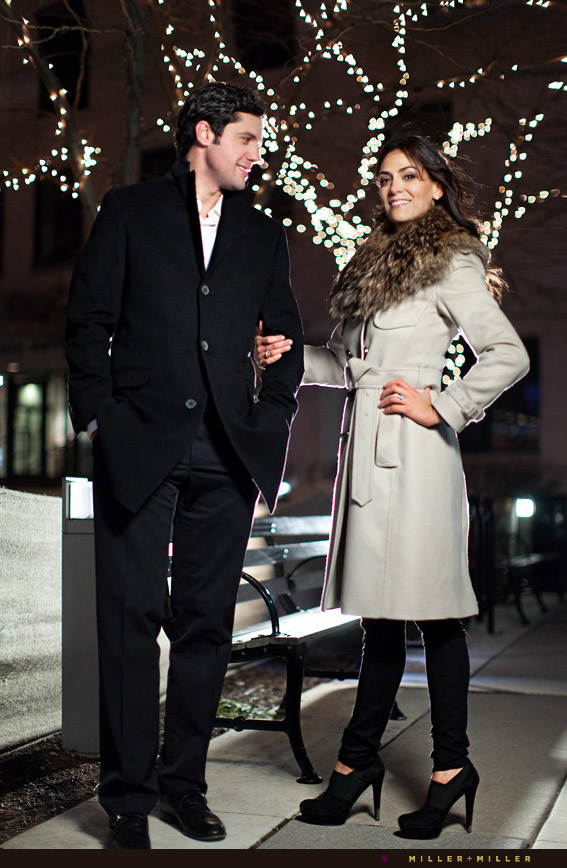 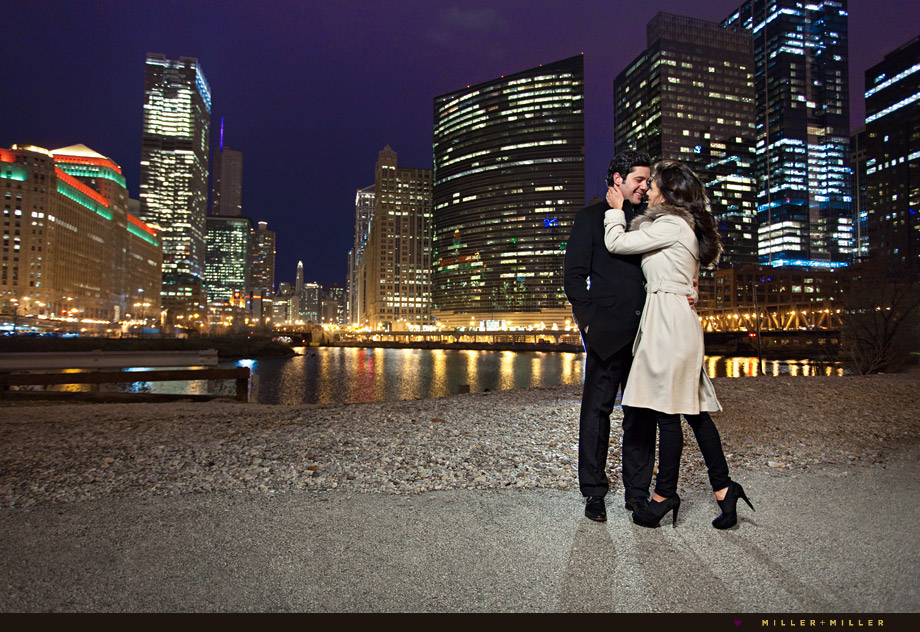 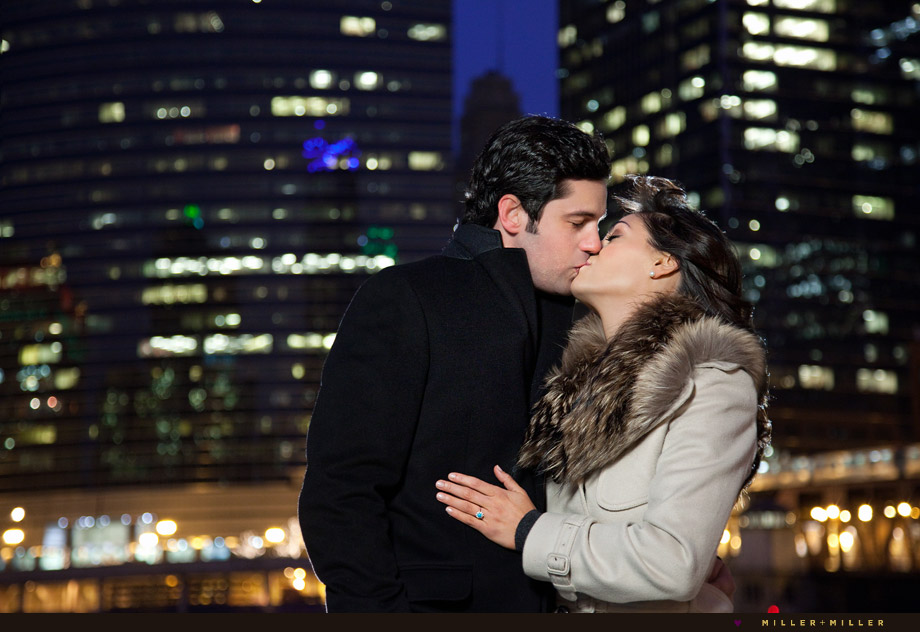 Just like each of our couples are unique, so is every shoot location’s personality. We headed to the North Shore area of Chicago with Sean + Emily to capture editorial style engagement photography along the rocky shoreline of the lake, at a secluded location beyond a wooded forest bluff, and later at a historic architectural setting. For Sean + Emily’s photo session, despite chilly weather and shortened daylight conditions, our three locations all came together perfectly, matching well to the couple’s personalities, as well as close in similarities to the spot where Sean proposed to Emily at, in Stockholm. S+E’s personal interests are without a doubt strong in their enjoyment of traveling. Frequently spending time at destinations overseas, Sean told us “we travel abroad really whenever possible.” Emily was one to admit, life is pretty busy for the two of them, and they both work a lot “we are pretty much work alcoholics” she said ( which us at Miller + Miller could relate easily to. ) But when they are able to travel, Sean and Emily enjoy taking in each destination and learning of the local history of the location, as well as the local culture. When emailing each other about their session, the couple proposed a few new to M+M spots rich in their distinctive interests of history and culture. Which we loved and were very impressed, thanks Sean! One of our favorite moments during their engagement session photography shoot was when Emily told us about Sean’s proposal that took place in June. It was one of the most beautiful of stories and what an unbelievably elegant location for it to occur at too. One of the best stories we have heard in our years of being wedding photographers yet, Sean’s romantic proposal took place while vacationing together and visiting his family abroad in Sweden…

“Sean decided to take me on a trip to Stockholm Sweden to visit his grandparents. It was somewhat of a routine trip as Sean goes back to Sweden quite often to visit them, but different this time, as I had only been with him to Sweden in the Winter months. This vacation was in June and Sean said that I had to see the other side of Sweden, and enjoy their long Summer nights. ( During the month of June, in Stockholm the sun brightens the sky the entire night, never getting fully dark. ) We packed our bags and got ready for a fun week of sightseeing and family outings. From the beginning of the trip until the end, we were running around sightseeing and visiting his relatives. On the last night Sean, told me that the two of us were going to spend the night out, and that I should dress up. I wondered what surprises were in store… but with him, I never could really know for sure what was going to happen. Well I got ready for the night and Sean called a cab and we were whisked into the city. When we arrived to our destination, I opened the door of the taxi and my eyes were filled with the view of Stockholm’s old town harbor. It was about 9pm and I could still see the sun closing in on the horizon. The sea was calm, the winds had died down and the water walk ways were busy with people enjoy an evening stroll. As I turned to Sean I saw him standing in front of a hotel called The Grand Hotel. It was a lavish hotel, from a different time. Men with long tailed tuxes, top hats and white gloves greet you as you enter through the gold and glass doors. A marble staircase gives way to a lobby filled with red velvet chairs, ornate chandeliers, marble statues and a smell of an old log cabin. Sean grabbed my hand and guided me to a small door on the side. As we made our way we passed a small library filled with books that seemed to be as old as the country, Sean opened the door and we were greeted by another man in a tux. It was a restaurant. It was a narrow restaurant, but on one side the walls were floor to ceiling glass. The view was of the beautiful harbor. We were seated at a table beside the glass wall. As we enjoyed a long dinner, Sean seemed relaxed, but as if his mind was somewhere else. After we ate the last spoon of our dessert, Sean next asked if I wanted to go for a walk by the water. The sun had passed the horizon, but there was still a faint glow in the sky. We walked towards the water and began to cross a small bridge that connected two small islands. Sean stopped me halfway through the bridge. He told me that we should just enjoy the moment and take everything in. The walkway was still quiet as most people had gone home from their walks. Sean asked me if I was chilly. I responded yes and he said, “ok you can have my jacket in a bit.” I though this was strange but didn’t think too much into it. Sean then took hold of my hands ask started telling me how much he loved me, and how much I meant to him. He asked me if I would love him forever. As he was saying this he put his hand into the inside pocket of his jacket and pulled out a small square box. I caught a glimpse of it and a million things ran through my mind. It wasn’t a typical ring box, so I really didn’t know if I was about to get a ring or some other sort of jewelry. He said he loved me and then opened the box. We both went silent. And then both began to tear up. He picked up the ring and gently slid it onto my finger. The first thing that came out of my mouth was “don’t drop it in the water.” We had just been resting our arms on the railing of the bridge. Sean just smiled and we both embraced. I quickly realized that he hadn’t actually asked me the question yet. As we pulled out of our embrace, I said with a chuckle you haven’t asked me anything yet? He just smiled and said: Emily will you marry me.”

Thanks Sean + Emily in sharing such an amazing story! You are two fabulous people, who are without a doubt madly in love with each other. Sean the proposal location sounds utterly breathtaking. We can’t but help to want to visit Stockholm now for ourselves. And Emily your engagement ring is simply gorgeous and quite unique, featuring a beautiful turquoise stone. We couldn’t help but ask about it’s significance… Sean’s selection of the round turquoise stone was him providing a part of his family legacy to her. The stone is an old family heirloom of the other side of his family, which is from Iran. Sean’s grandmother had come from the Persian Qajar dynasty in Iran and the stone has been passed down from her. Sean had the turquoise set and surrounded by diamonds… unbelievably stunning. Sean and Emily we hope you love seeing these preview photos and they remind you a bit of the proposal day in Sweden. We are looking forward to your upcoming wedding day and it being our first in 2012, only a few days away. Enjoy!

♥ Sean + Emily’s ceremony is set to take place at Saint Thomas More Church and the reception will follow at the Palmer House Hilton Hotel in Chicago. The iconic and legendary Palmer House hotel is a perfect hotel selection for Sean + Emily’s personalized taste. The venue offers impressive rooms with modern luxurious renovations all historically kept to the hotel’s original Beaux Arts architecture. The Palmer House is a landmark hotel and a member of the Historic Hotels of America.

Emily’s visited Zazu Salon in Hinsdale on the morning of this engagement session. Hair stylist Andrew and make-up by an independent artist Morghan.